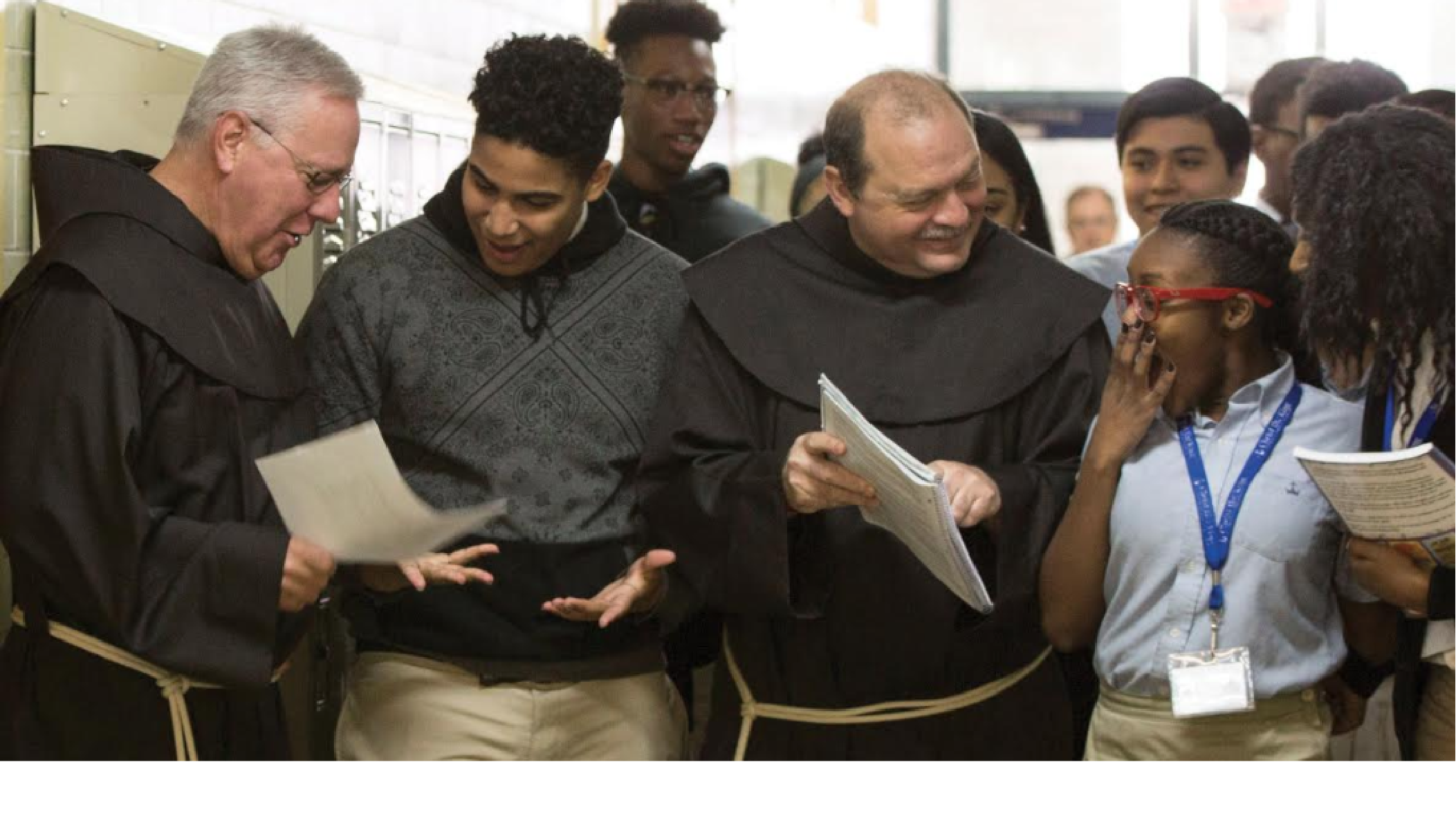 On any given day of the school week, a visitor to Christ the King Preparatory High School will discover that a quarter of the 260 students aren’t there. Father Rob­ert Sandoz, OFM, President of the school, works tirelessly to make sure that continues. It’s a central part of the school’s focus and philosophy. Christ the King is part of the Cristo Rey Network, an innovative, nationwide 34-school edu­cational approach to reach the urban poor with a Catholic high school education.

Once a week, students leave the classrooms and venture off to offices and workplaces in downtown Newark, the nearby office park suburbs, or to Manhattan. They are paid a stipend that goes to pay for their school­ing and, in the process, earn an education about the real world.

“Part of the work curriculum is to help them learn to adapt to each business culture,” Fr. Robert said. Christ the King prepares students for a future in which it is expected that the average American worker can expect to participate in seven careers across a work life. Preparing for the world of work is valuable in any education, but particularly so here in New Jersey’s largest city.

Christ the King students reflect the city’s population. Many come from poverty-scarred homes. That can mean, in some cases, students who literally live out of the family’s car. One student was forced with her mother to find shelter beneath a high­way overpass after an eviction.

Violence on mean streets have had an impact on students; once a school van was shot at, in another instance, a student was shot and killed in his family’s apartment. When shots do ring out, students here have developed a finely-honed instinct to hit the ground. 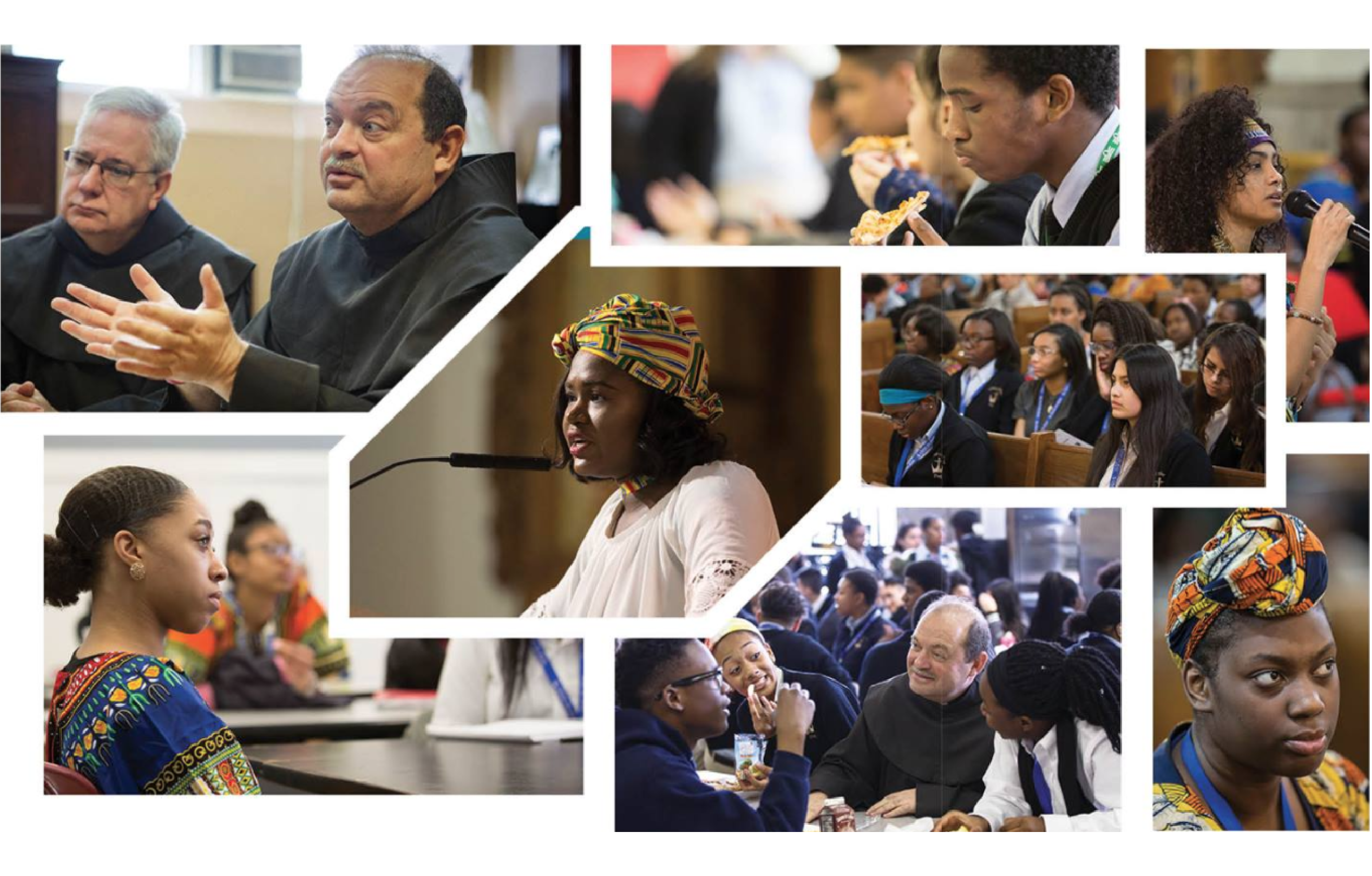 Christ the King, which began in 2007 and is housed in a building which once was Our Lady of Good Counsel Elementary School, provides a step to a dif­ferent kind of life. Tuition is kept low, thanks in part to a subsidy generated by companies who pay for stu­dents’ labor. The average stu­dent pays about $1,500 a year; the rest of the $12,835 per year student cost is made up by benefactors and the support of the job network that Fr. Robert has built up. Among its supporters are members of the St. Anthony’s Guild, who provide food for some of the needy students.

Among its supporters are members of the St. Anthony’s Guild, who provide food for some of the needy students. Dozens of companies and non-profits take the students on as employees, with each stu­dent filling a job once a week. What the companies get is a trained workforce often exceed­ing expectations. As part of the Christ the King curriculum, students are taught love at work how to operate office computer systems. They are also told about business “soft skills” in­cluding dressing appropriately for the office, looking people in the eye while shaking hands, and projecting a walk, which communicates eagerness to work.
Boys are taught how to tie their neckwear and polish their shoes. Girls are taught appropri­ate office hairstyles. “We are trying to help them gain confidence,” offers Fr. Rob­ert. Christ the King students learn a mantra that they are told to repeat regularly: “I am a per­son of promise.” The statement is recited in classes preparing students for their work assignments. It’s a counter message to one that students hear regularly, that minority kids from Newark can’t expect to amount to much.
‘They have a broken-down sense of themselves,” said Fr. Robert, a former high school English teacher who came here soon after Christ the King opened. He was previously pas­tor of St. Joseph Church in near­by East Rutherford, N.J. “The issue is poverty; it is a grinding, corrosive poverty. They live with this feeling of vulnerability be­cause they are so poor.”
Father Gregory Gebbia, OFM, Christ the King principal for the past four years, handles the day-to-day operation of the school while his Franciscan col­league seeks out support, both in donations and in companies that want to partner as employ­ers. Christ the King is a powerful vehicle that addresses inequities in American education, said Fr. Gregory.
“Students have been cheated out of a good education because they don’t have the right zip code,” he said. He became famil­iar with the Cristo Rey network in his native Chicago, where the concept began with Jesuit edu­cators. When there was a need for religious to meet the needs in Newark, Fr. Gregory jumped at the chance to join his Franciscan colleague.
At Christ the King, he said, “We are the school that works.” And that is taken quite literally. The end result is a school atmosphere that students take seriously.
The work experience, he said, “makes the kids study better. Because they can see why they are studying. They see the con­nections between study and work.” The jobs are, admittedly, en­try-level positions. But even in a law firm’s mail room, a high school kid from Newark can see what it takes to one day be a lawyer. In another business, they can see how being com­puter savvy can make a differ­ence. These are experiences they wouldn’t otherwise have without the opportunities offered at Christ the King. They see that they can compete in a complex world, coming back to school with renewed confidence.

“Maybe I can do that some­day,” they tell Father Gregory when they get back to their classes. Just opening up a wider vision can create pathways for students. Some, for example, had never visited Manhattan- a half hour train ride away before taking up jobs there as part of the school’s curriculum. When a group of students went to a school fundraiser at the New Jersey shore community of Spring Lake, they asked to get a look at the ocean, something they had never seen before.
Erin Crowder, a junior student at Christ the King, was attracted to the school because of the jobs component. “Working will help me understand what I want to do,” she said. Erin, who does office work at the Federal Re­serve in Newark, talks quickly, with rapid-fire enthusiasm for whatever is engaging her at the moment.
Her classmate, Elijah Benson, works at New Jersey’s Liberty Science Center, assisting pa­trons and guests. He’s also done work in the payroll office there, a place where math knowledge is at a premium. It’s made high school algebra rele­vant to his life.

Elijah wants to be a writer; Erin is interested in advertising. Both plan to attend college. For Erin, Christ the King’s Catholic dimension is important. About a third of the students are Catholics, with most of the rest from various Christian denomina­tions. So prayer services and other religious events take on an ecumenical feel, with Spanish hymns reflective of the school’s large Latino population as well as incorporating African Ameri­can Gospel traditions. Teachers appreciate the work/ study/religious dimension of Christ the King as well.
Jenny Campbell, a world his­tory teacher, says her students are able to connect their work world experiences with their so­cial studies lessons. “We use content to speak to their lives,” she said, noting, for example, that basic knowledge of economics transfers more easily to a student with experience in cor­porate offices than with the typi­cal high school sophomore.

English teacher Ed Curtis works his lessons around the is­sues of workaday life. For ex­ample, students are taught to use proper grammar for e-mail correspondence and avoid text message shortcuts they use with their friends.
To keep this valuable educa­tional enterprise going, Fr. Rob­ert keeps building his roster of employers. “It’s why I have gray hair,” he joked. He would like to expand the school to serve more students, but the model relies extensively on corporate sup­port. Without it, the concept can’t work. Many of his days are spent outside the school, pitching the Christ the King model to corpo­rate leaders.

What he has developed is impressive by any standard. Firms that employ Christ the King stu­dents include attorneys’ offices, the Roman Catholic Archdio­cese of Newark, AT&T, Harper Collins Publishers and Blue Cross Blue Shield. Fr. Robert’s pitch is that the companies are not simply donating to the school; they are receiving the services of polite, well-trained entry-level workers eager to learn.
That eagerness has translat· ed into numerous success sto­ries. One Christ the King gradu­ate went on to college at Penn State, all the while working as a Spanish translator for a Newark law firm when on vacation. After graduation, she got a full-time position there.
Almost all of Christ the King graduates go on to college. Last year’s senior class, consisting of 55 students, won $9.2 million in scholarship awards. Letters of college acceptance and scholarship awards line the hallways. For Fr. Robert, Christ the King fulfills its goal to offer a lifeline to Newark students who otherwise might fall through the cracks. He spends much of his time spread­ing that message.
He continues to scour local Catholic elementary schools for good B or C students with potential. That is the Christ the King sweet spot. If they are A students, there will be opportu­nities for them in other places eager to take them in. The school doesn’t have the re­sources to deal with many low­performing students. But it does give those who are focused, good students who want to learn, a chance to thrive. Fr. Robert can see the differ­ence Christ the King makes by sophomore year. Freshmen stu­dents go to their work assign­ments with some tentativeness and wariness. They are, after all, 14-year-olds, many of whom have rarely, if ever, traveled out­side their Newark neighbor­hoods. The world of work for poor, minority youngsters can be intimidating.
And then, by their sophomore year, it begins to connect. Maybe they find a mentor at their workplace, willing to show them the ropes. They see that quadratic equa­tions mean some­thing in the real world, that the questions they may have in religion or history classes are shared with students or peo­ple they encounter around the water fountain, or at work. They begin to realize that knowledge and education help open the doors into American work life.
For Fr. Robert, it is an educa­tional journey of discovery that can make an impact on a few hundred young people in the troubled city of Newark, break­ing dependence born out of grinding poverty. Christ the King, he said, “is a major deal for them. It transforms lives.”
Pondering his religious voca­tion as students begin to break for lunch outside his office, Fr. Robert said that he could see the hand of God placing him among the high schoolers here. He said this is where God wants him to be, among students find­ing a way out of poverty via hard work and determination. “If St. Francis could choose where he wants me to be, it would be here. These are the most vulnerable,” he said.